Sleeping in cars is uncomfortable. I never know what to do with my legs to prevent my butt to go numb, and my heavy head always struggles to find a decent place to lean on. I don’t know how some people can just sit straight, lean back a little, and let their head hang on to their torso. If I were to do that, I know for a fact that I’d end up with a big wet patch on my t-shirt caused by a continuous stream of drool coming down from the side of my mouth.

That’s not the kind of skill you want to show off to people, let alone a guy. So if you ask me, I’d rather sleep on the ground on a thin blanket than in a car… given beautiful weather conditions, that is. I’m not a masochist.

That evening, the temperature got depressed, and went down all the way below 10C, and the wind drank one too many Red Bulls. Leaving the car was not an option. The only thing left for us to do once it got dark, was talking until we fell asleep. And so we did: we talked about a number of different things, including Instagram, photography and travel, and eventually we fell asleep. Well, he did; I just spend the next couple of hours feeling helpless and frustrated. I tossed and turned more than a rotisserie chicken on a stick.

The fact that I wasn’t particularly tired didn’t help, so eventually I gave up on the idea of sleeping and decided to just stare at the sky. That’s when I noticed the amount of bling bling the universe was showcasing for us that night. It was around 1AM and the wind had chilled (pun always intended), and it seemed ridiculous not to take the opportunity to get some night shots. I woke IG Man up and told him to have a look at the sky; he didn’t hesitate much. We gathered our equipment, we wore an extra layer of clothes and off we went to the viewpoint where we had recently been to see the first sunset light. 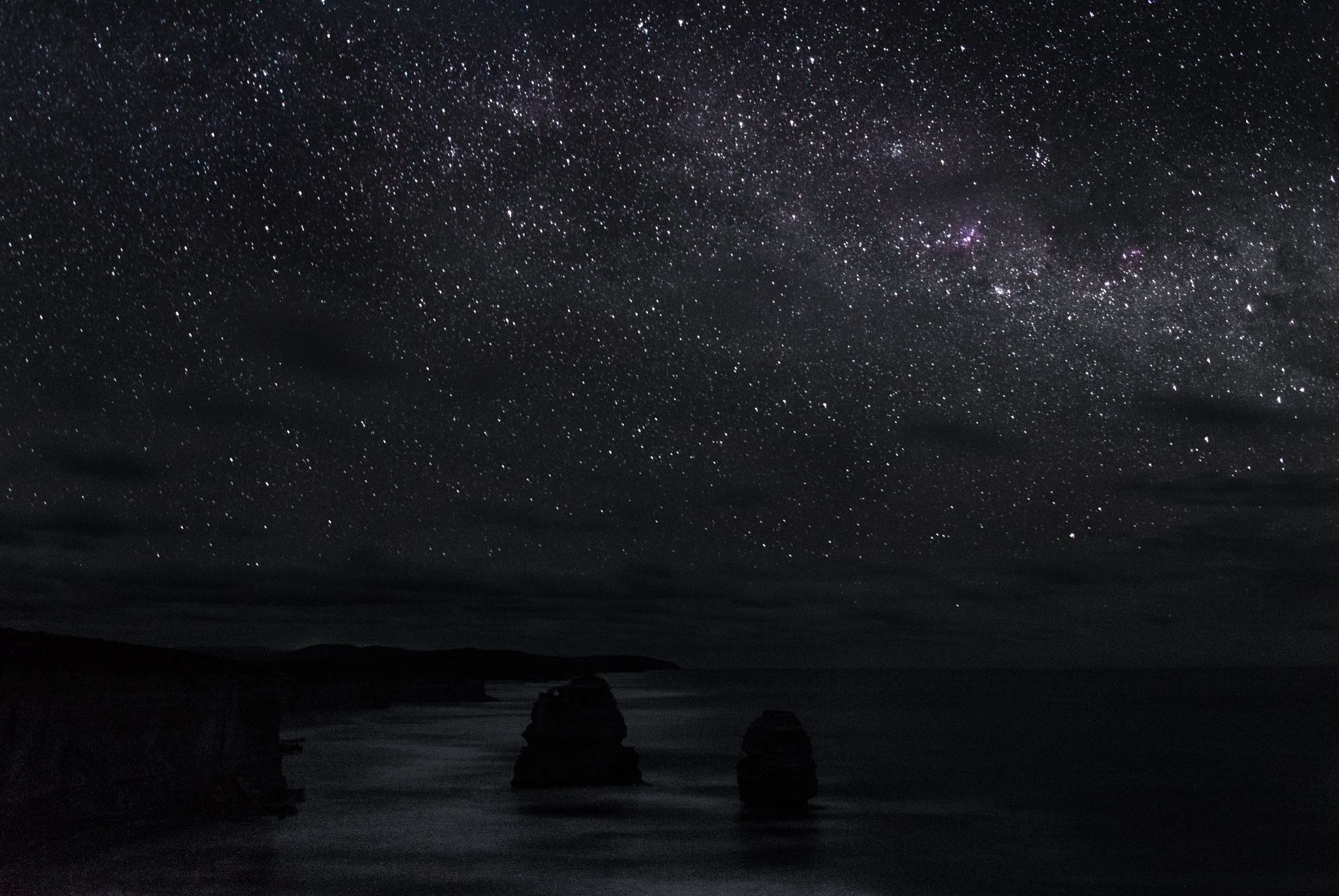 I was so cold, I thought I could cry, but the excitement to go stand on the edge of a cliff to stare at the millions of stars above us and take photos of them, was enough for my brain to keep busy and ignore my internal thermometer warnings — no extremities were going to be lost that night and no tears of pain were going to be shed.

As we made our way to the viewpoint, IG Man was still feeling too sleepy to keep up with my pace. I was marching down the visitors path like a woman on a mission, when all of a sudden I saw a massive creature suddenly jump in front of me and glare directly at me with a prepotent look that had I been a local, I wouldn’t have gotten so close to wetting my pants. It was a giant kangaroo. It was over 2 meters tall and had the muscles of a bodybuilder. Seeing it pop out of nowhere in the middle of the night in front of you is not exactly the way you’d like to see a kangaroo of that size for the first time.

It was in that moment that I understood why so many outsiders like to say everything wants to kill you in Australia. I’m still alive, but I now feel a certain connection to that saying.

IG Man grabbed me by arm and told me to stand still.  Two minutes went by, or maybe even less, and the kangaroo decided we didn’t look as appealing or as challenging as he’d wish, and disappeared with one jump. We were safe. We called him Bruce, partially because that made us feel a bit more laid back about the encounter, partially because we were hopped up with fear and excitement and our brains were struggling to restore their normal function.

One minute later we reached out point of interest. The view was breathtaking. I couldn’t believe I was seeing all that beauty with my own eyes. It took me a while to remember the last time I had seen such a beautiful starry sky surrounded by nothing but nature: it was back in 2010 in the mountains of Morocco. Way too long ago!

We took out our tripods, we set up our cameras and we started taking several long-exposure shots in the hope of being able to capture everything we were seeing and more. We experimented a couple of times with flashlights and our silhouettes, but I liked what we got from Mother Nature better than any of the other shots. The wind was very strong and my tripod wasn’t strong enough to stand completely still, so excuse the blur. 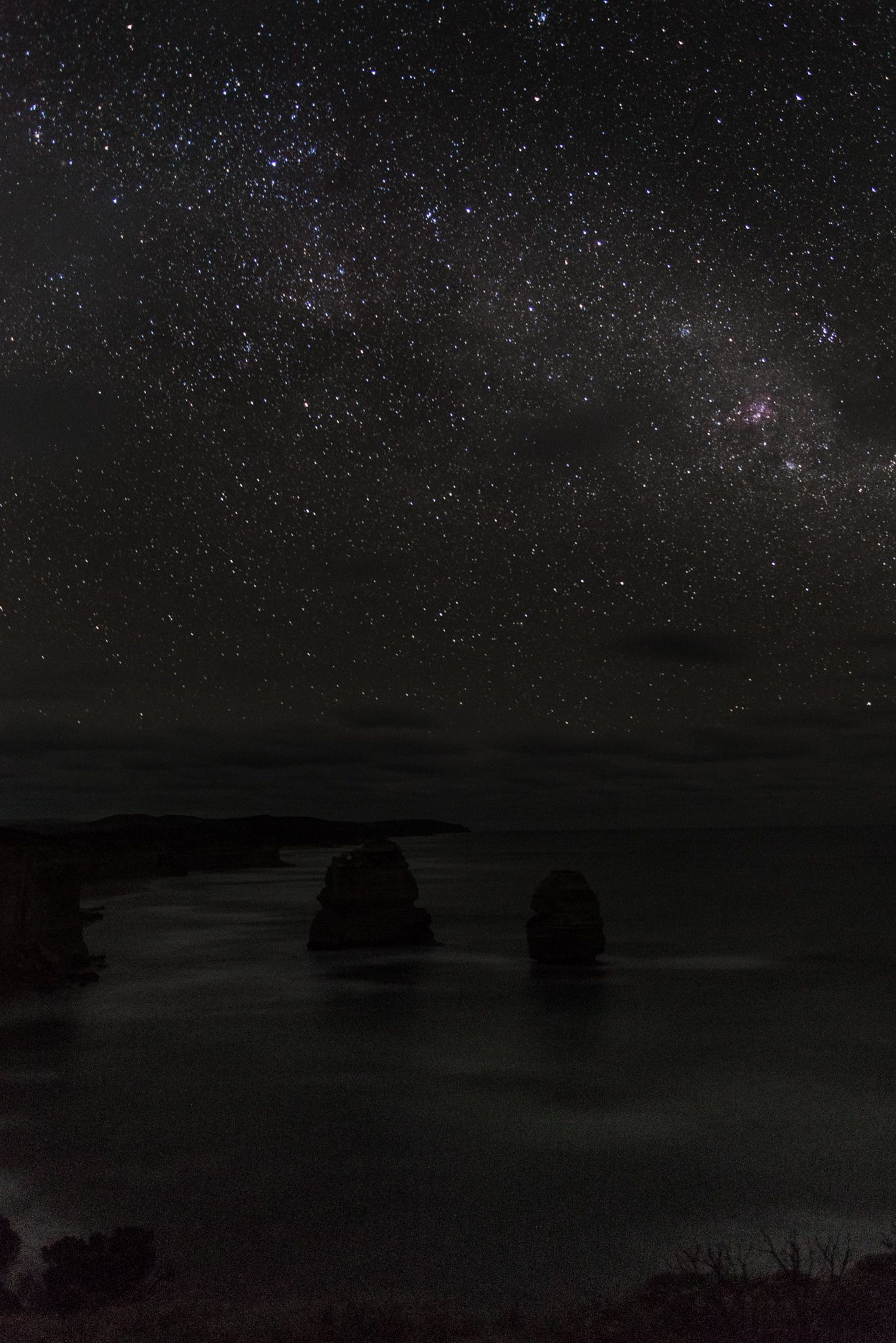 We spent about an hour taking photos and just sitting on the one bench we found staring at our surroundings. I felt so small… and so freaking cold! My body was not having the best of times and my melatonin levels told me it was time for me to sleep. We got our things and we went back to the car. I would have loved to stay there longer, but I just couldn’t do it. I stared at the sky until my eyes closed and I finally fell asleep… for about half an hour.

The following 4 hours went by frustratingly slow, as I fell asleep and woke up soon after due to a numb leg or a forehead in pain from being smashed against the window for too long.

Finally, the sky began to get lighter and the stars went to sleep. It was time to go set up for some sunrise shots. Once again, I woke up IG Man, who had slept like a king the entire night ( bless him), and we were on our way back to the cliffs.

The sunrise was just as majestic as every other light show we had seen in the past 12 hours. I wish it had lasted longer, but all that wishing was unsuccessful. Hues of pink and purple coloured the sky, until the sun came up, blinded us with its glorious light and then hid behind the heavy clouds that had been heading towards it for half an hour or so. 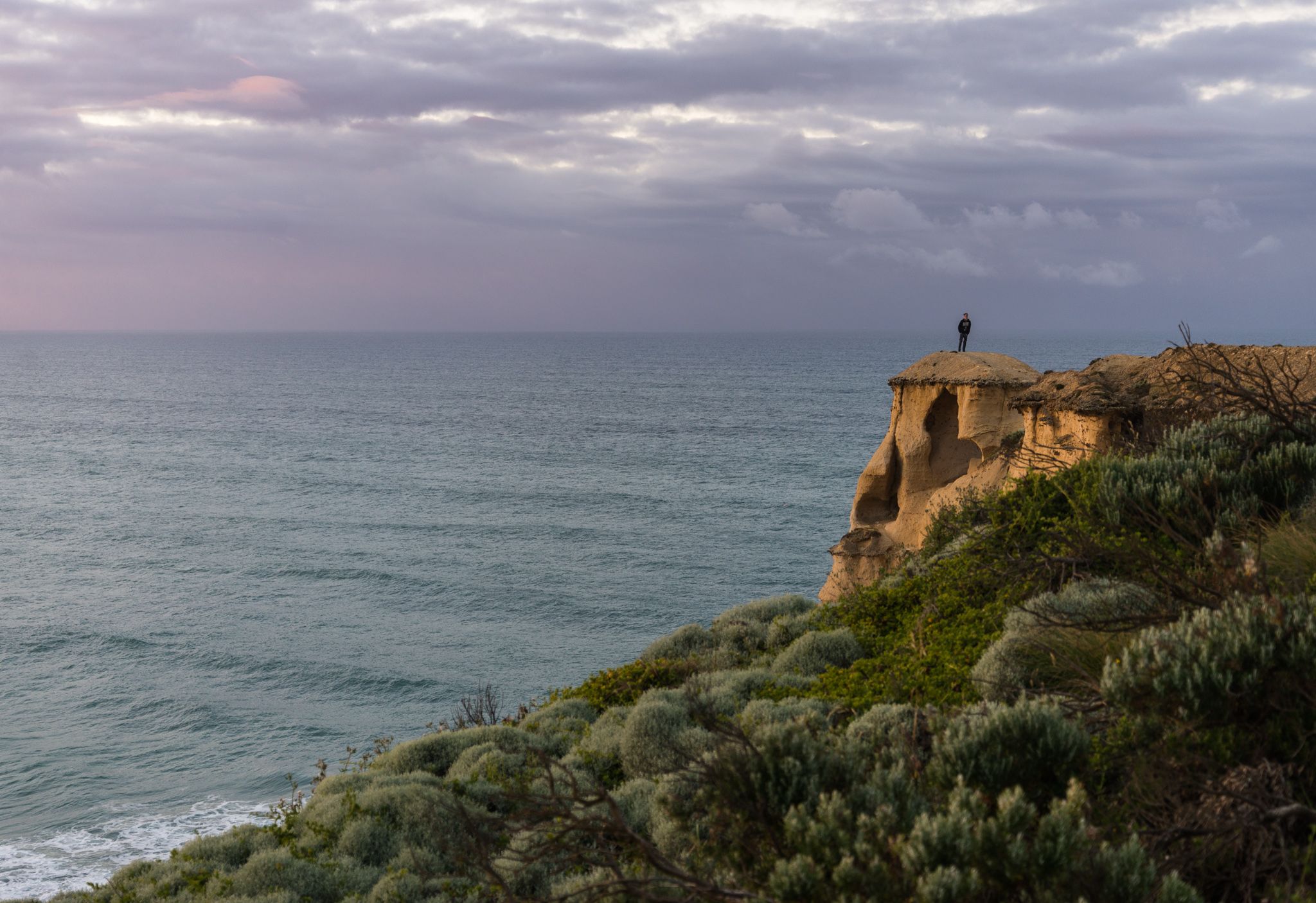 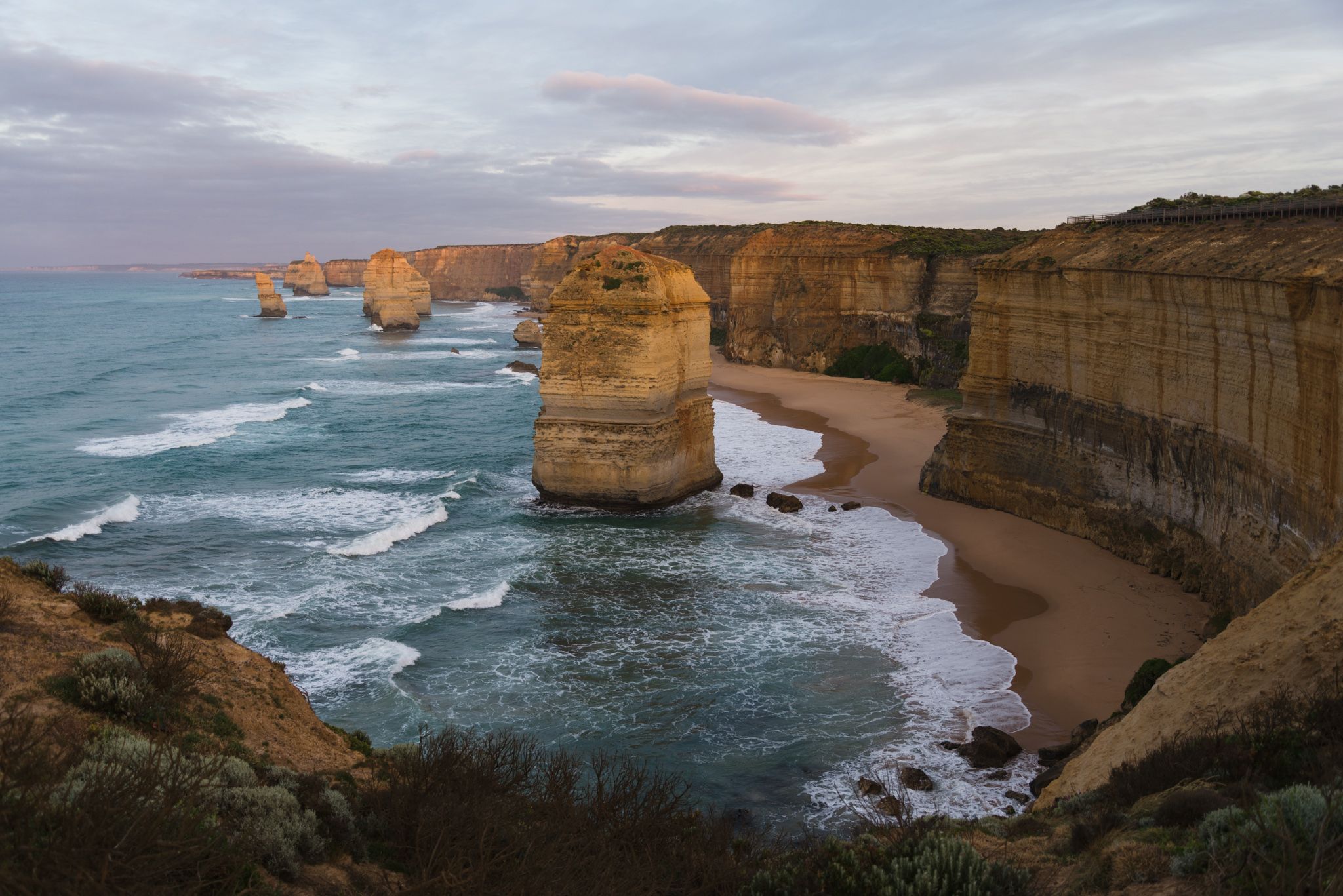 A new day was beginning and we still had a couple of other locations to check out before we headed back home. We went back to the car and drove a few minutes until we reached Loch Ard Gorge, right before it began to rain.

I ran out of the car and headed to the main cliff: the view was just as awesome as I expected. The best part of that and of the two previous photo missions, was that there was none around, so we had the entire place for ourselves to do as we pleased with our cameras. Sadly, however, it didn’t take long for tourists to show up. 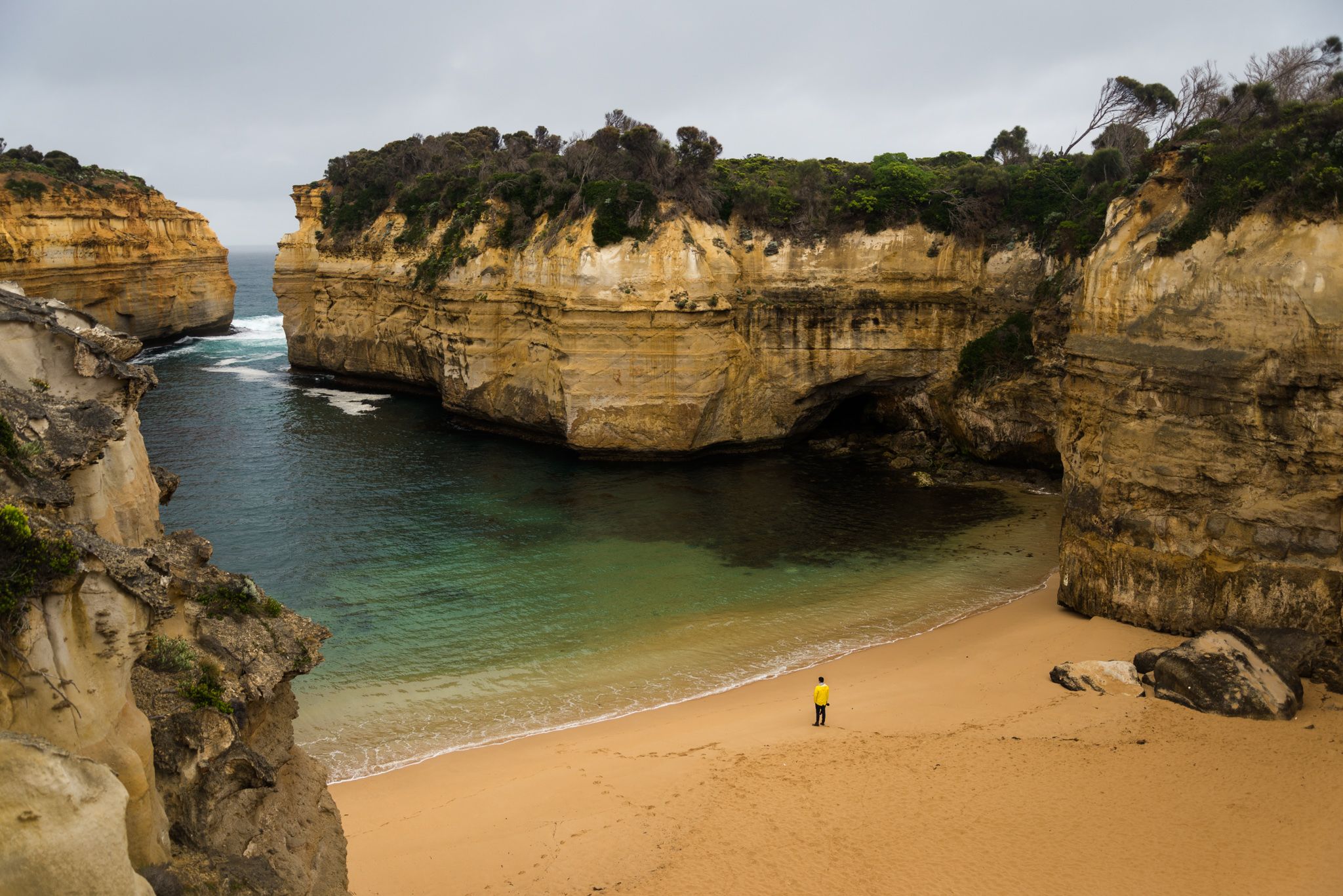 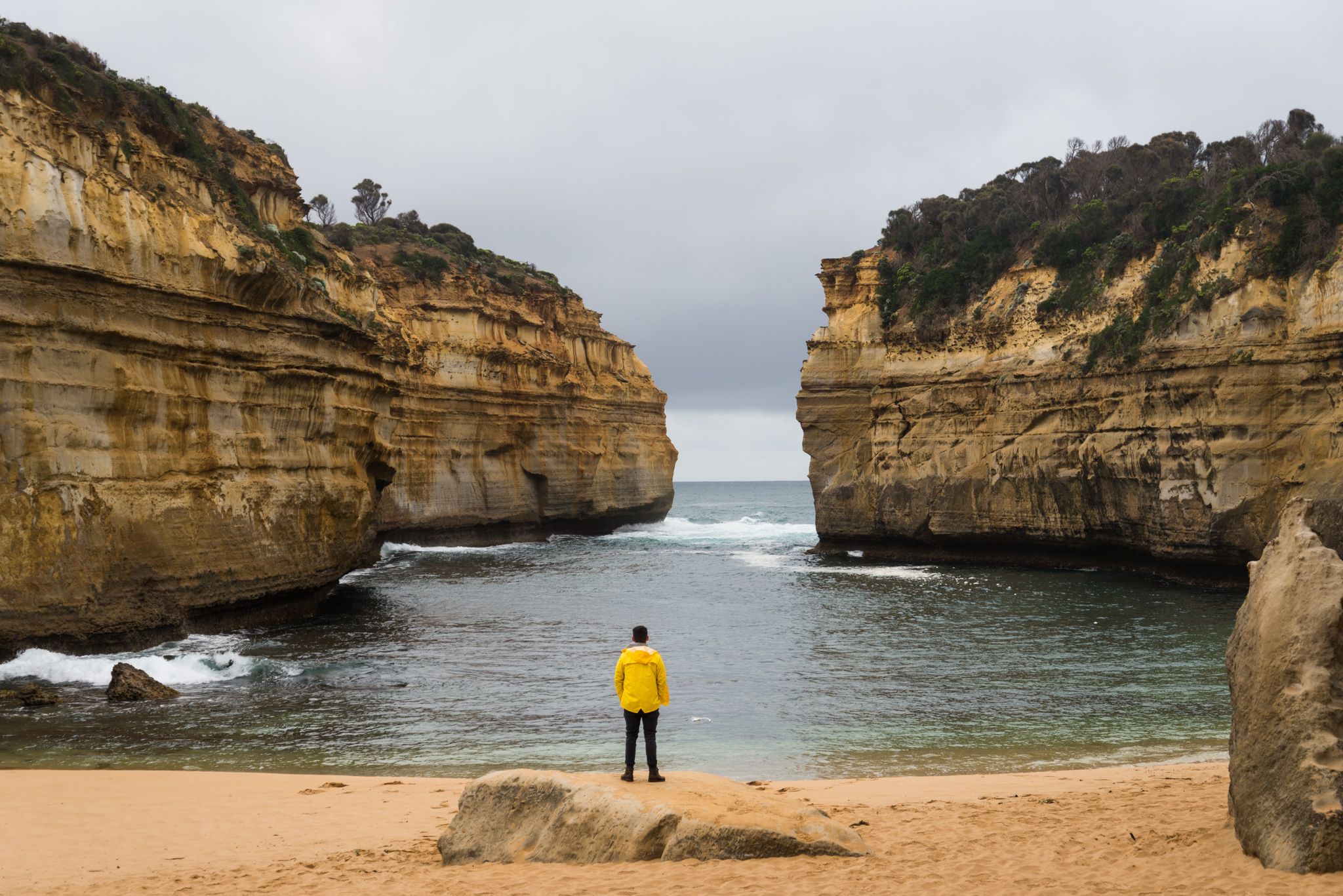 We snapped a few shots from different angles and spots, occasionally posing for each other to give our photos some scale, and then walked down to the beach only to confirm my suspicions: the water was very cold.

You can call me Karen Smith…

Before we knew it, rain began to fall on us and we had no choice but to get back to the car and have breakfast. Bread and peanut butter with banana was on the menu. One bite and I became the happiest girl in the world. I will never get enough of that combo. The sandwiches were in our stomachs and we were ready to head over to see the California Red Woods and other hidden gems in the Grand Otway National Park.

The adventure was not over yet…

What to see my sunset pictures from Gibson Steps and the 12 Apostles?
Tags: australia landscape night shots photography story travel