You know when they say that you should try to get acquainted with the locals when you’re in a new place because they’ll always be able to tell you where to go and can show you the less touristy places around? Well, that’s kinda of what I did when I first got to Australia. Actually, I did that even before I moved there.

I became friends with a guy I had been following for a while on Instagram, who was into photography like myself and, coincidentally, lived in the same city I had chosen as my future temporary home. He had over 100k followers at the time. He wasn’t a celebrity, but he sure thought of himself as one. He said he’d show me “secret spots” around Melbourne and that he’d take me on photo adventures to places he knew like the palm of his hand, such as the Great Ocean Road and surrounding areas. 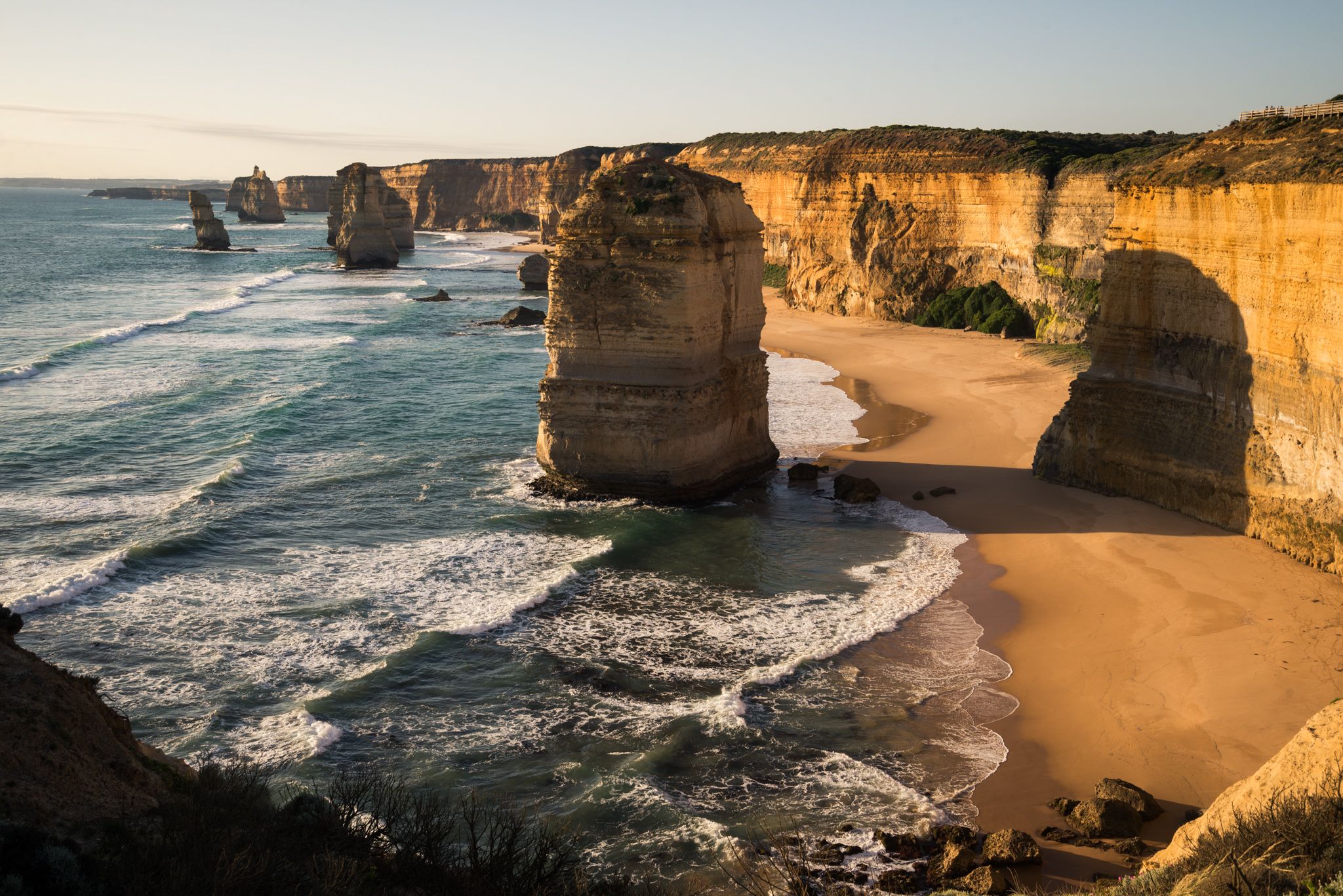 Now, would you think that that was creepy or exciting? I was torn, but the excitement of moving across the world to finally live my Australian adventure kept my spirits way too high for me to be concerned about the possibility of having become chummy with a creep.

Fast forward a couple of weeks, and there I was, hanging out at the museum with this guy I had already gotten to know a little from more than 15,000km away. He had more gel in his hair than a 90’s pop star, and pants too tight I was surprised his feet were getting any blood circulation at all.

It felt weird, but not in a what-have-I-done-I’ve-got-terrible-judgement kind of way. He turned out to be a moderately decent specimen and he kept his promises… well, some of them at least.

In the few months that followed, we went on a few overnight trips around the state of Victoria, just like he had told me we’d do, and we took a ton of photos of different kinds as we explored the Australian wilderness.

The most memorable trip was the one we took to the Great Ocean Road. I had seen plenty of photos of the 12 Apostles, of Gibson Steps and other rock formations around the notorious road, so my expectations were not particularly high. I knew the place was beautiful, but I didn’t think I was going to be on the verge of tears by just looking at big rocks.

We arrived to Gibson Steps before sunset, just like we had planned, as our goal was to shoot the sunset at the 12 Apostles. As I walked up to the edge of the cliff overlooking those two big stacks of minerals standing tall (one of them) and proud in the water, I couldn’t help but bring my hand to my mouth and just stare at that wonderful view. I had to take a moment to snap out of it and tell my mind to stop screaming with excitement, and let me be a normal human for a second.

Then, as we were about to descent to the beach, we thought we’d just go straight to the 12 Apostles, which are located only a few minutes away, and watch the beginning of the sunset there, and then go back to Gibson Steps to enjoy the rest of the show. Why? Tourists. We wanted to avoid them, so we decided to leave the most popular place for sunrise and enjoy a quiet sunset by the less appreciated spot along the road at that time of the day.

We got to the 12 Apostles and I ran to the viewpoint. Knowing that I had a mini freakout while watching Gibson Steps, you can only imagine how I was feeling when I finally got to see those 7 rocks (the other ones have collapsed in time) with my own eyes. I had dreamed of that day for so long, I’m surprised I didn’t burst into tears, ugly crying loudly enough for people to be concerned about me and slowly try to drag me away from the edge of the cliff. 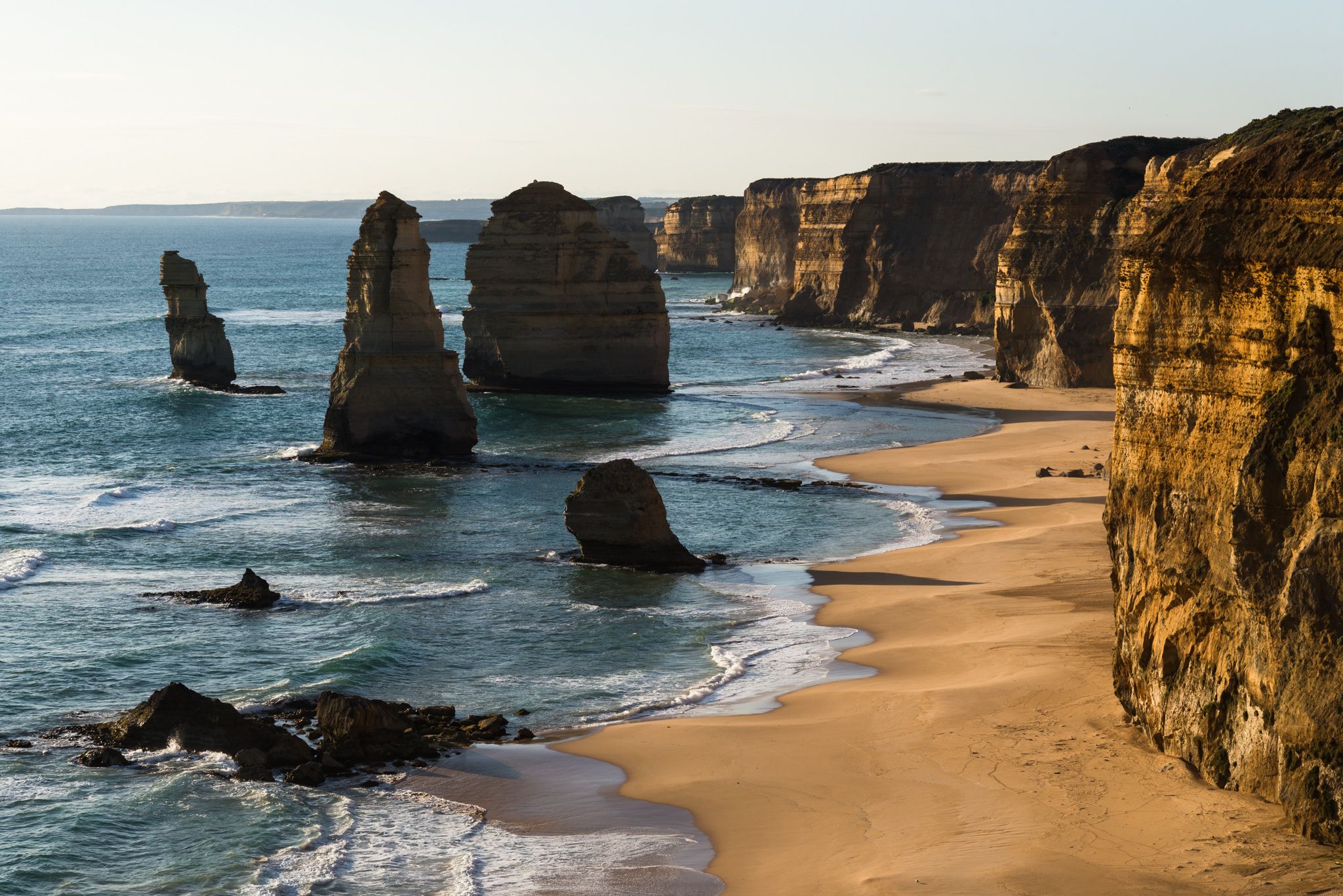 If you’ve been there, you probably know what I mean. If you haven’t, then now you know what to expect, only you might be able to handle the situation a  little better than I did.

So we took a few snaps and then headed back to the neighbouring rocks. We walked down that beach taking pictures from every angle we can think of, trying to capture the ever-changing colours of the sky and the clouds, as the sun fell down behind the ocean and we had to run back up to the car before we were left in the pitch dark. 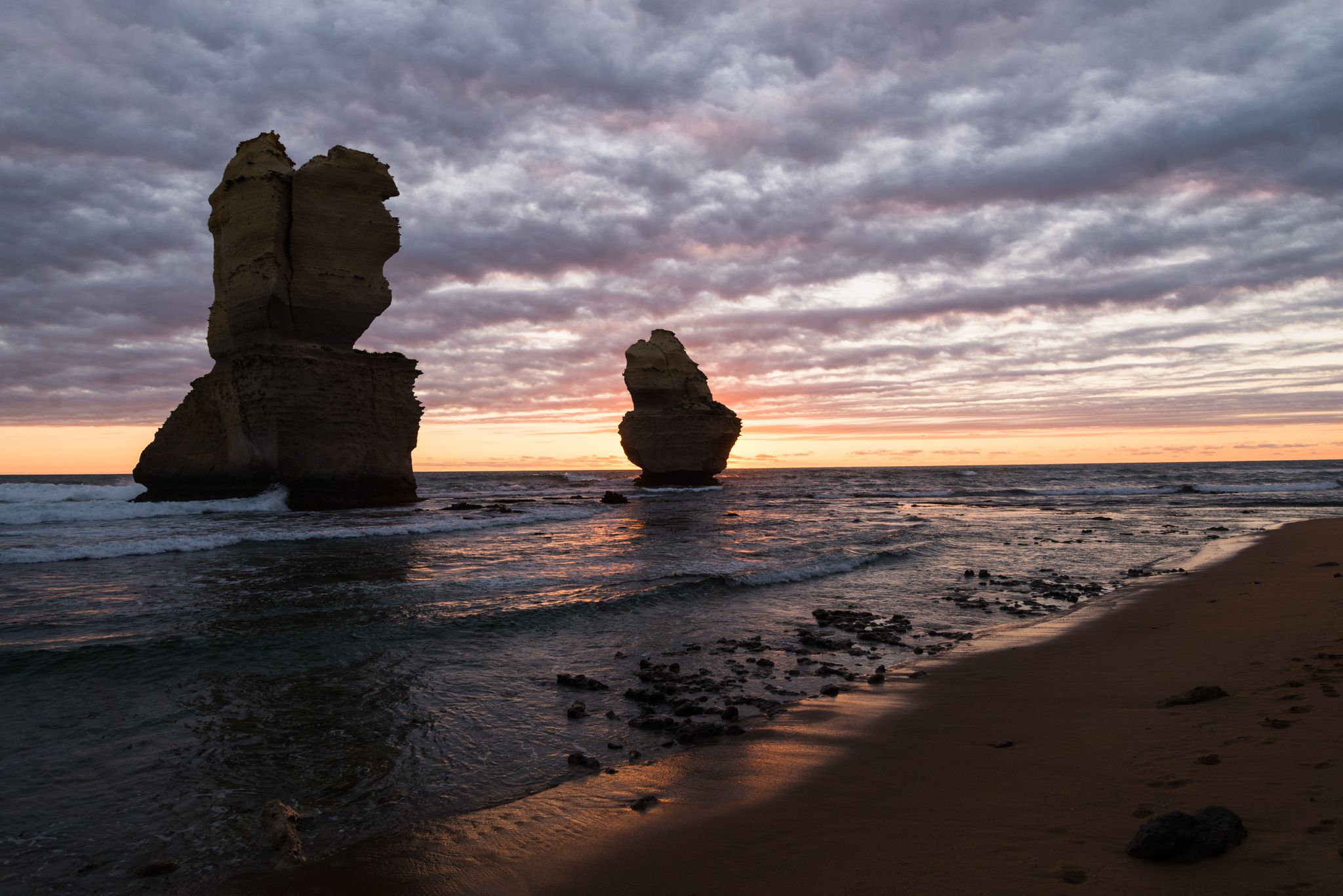 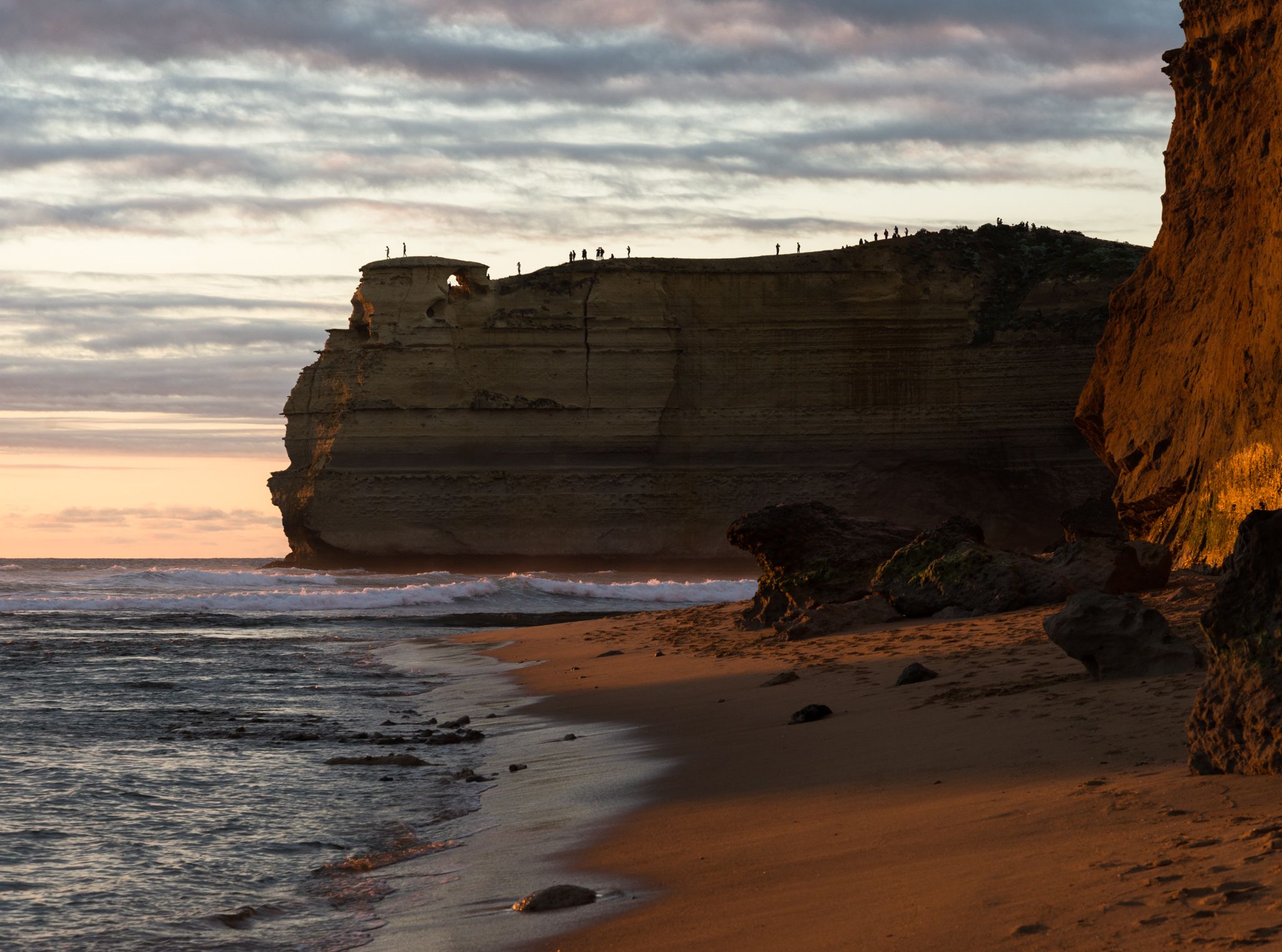 And in case you were wondering, there was nothing romantic about any of it. The walk on the beach was done exclusively for photographic purposes and I was too in love with the surrounding scenery to even think of anything else — other than food, of course. I’m always thinking about food. 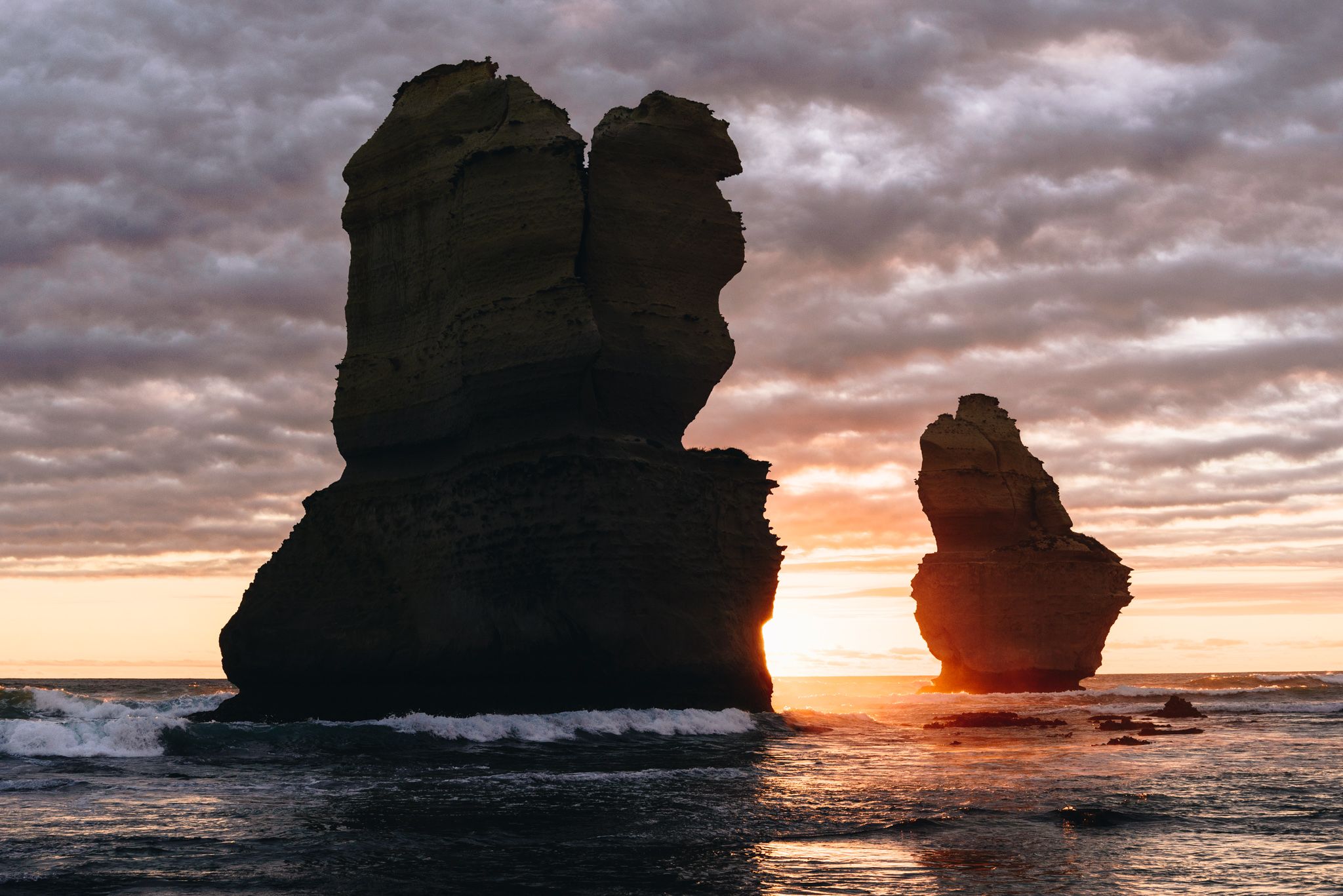 Because Australians are chill people, you are allowed to sleep in your car in a random parking lot within the perimeters of a national park or touristy area, and that’s exactly what we did. We went back to the parking lot of the 12 Apostles and spent the night there, which mostly consisted in me trying to get comfortable in the car while damning the designers of the vehicle for making it so incredibly unpleasant to sleep in. Very inconsiderate of them…

But before we fell asleep, we decided to go back to the viewpoint to take a couple of night shots as the sky was covered with a million stars and it was begging for us to capture it.

However, if you’re interested in seeing those photos plus the ones I took during sunrise, I’m afraid you’ll have to wait until the next post, as I have more to say and I don’t want you to fall asleep reading any more of this. If you got this far, well done to you and thank you! Catch you soon!

Ps. The guy turned out to be less of a decent specimen in the end. Ooooh well.